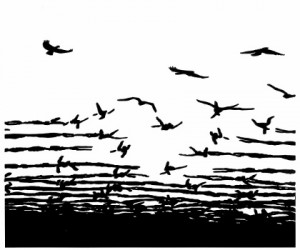 Late in 2012, some of the activists involved in the occupation of the French Consulate in Düsseldorf in June 2012, received letters from German state prosecutors, declaring that the official punishment (Strafbefehl) for each person involved was to be 1.400€. This was put together by 70 daily rates (Tagessätze) of each day 20€. Of course each of the activists involved filed an objection.
No criminalization of legitimate political protest!
The harsh and high punishment can only be explained by the state logic of “setting an example” for potential future political protests. During the symbolic occupation of the French Consulate in Düsseldorf nothing was broken nor Consulate staff harmed. If so, it is the eleven activists who were brutally beaten during the eviction, insulted and kept over hours in custody by German police. Racist and sexist harassment was used to humiliate the activists during those hours of powerlessness.
No silence on their injustices!
Millions of people die each year on the way of trying to enter the capitalist metropoles of the imperial ‘Global North’ – be it at the U.S.-Mexican Border, in the Pacific Ocean trying to reach Australia or on the numerous borders of Fortress Europe. They die because of being denied “legal” entry into First World countries – countries which for centuries colonized, enslaved and committed genocide on Communities of Color all over the world; countries which till today use these geographies for capitalist exploitation (“cheap labor”, “cheap land”, “cheap resources”) and colonial supremacy fantasies (“tourism”).
We, citizens of these First World countries, are sick of seeing what our governments are doing under the fake slogan of “national security” and the “protection of democratic freedoms” and declare: no one is free until we are all free!
This is why the occupation of the French Consulate in Düsseldorf in 2012 took place – out of the pain of another murder in the name of “our” citizen security!
We don’t feel safe as long as our friends and family from all over the world can’t feel safe in these First World countries. We don’t feel safe until everybody is guaranteed a life in dignity with access to all the privileges, we, as citizens, enjoy.
Until then, we are willing to take our struggle to each corner of these countries full of richness for few and based on the poverty of the majority. Be it in Düsseldorf – or anywhere else.
Facing repression
Please support the activists in joining the court hearing of eight of them in Düsseldorf in large numbers:

Repression in a society based on capitalist exploitation means – money. Much money. Please support in making funds accessible for paying the fines and costs (such as lawyers) connected to the occupation:

No Borders. No Nations.